Bring your own picnic and enjoy lunch in the garden with other members after the tour. 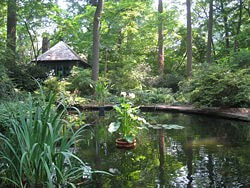 ​About the Barnes Foundation Arboretum
In 1922, when Dr. Barnes and his wife, Laura Leggett Barnes, bought the Merion property, it already housed a collection of specimen trees that its previous owner, Captain Joseph Lapsley Wilson, had started assembling in the 1880s. The site became the home of the Barnes Foundation, and Wilson stayed on as the first director of its arboretum. While Dr. Barnes concentrated on the art collection, Laura Barnes devoted herself to the arboretum. Her legacy lives on in the beauty of the landscape and in the horticulture school that she founded in 1940.

The 12-acre arboretum is astonishingly diverse for its size, with more than 2,500 varieties of woody and herbaceous plants, many rare. The peony and lilac collections date from the early 1900s and are important genetic resources for conservation and study. An herbarium started in 1968 by John Fogg, a longtime instructor at the arboretum school and director after Mrs. Barnes, contains more than 10,000 specimens that supplement teaching and research.

Several of the rarer varieties, including many from Asia, were acquired after the 1876 Centennial Exposition that took place in Philadelphia. Under the directorship of Mrs. Barnes, the arboretum gained other rare trees and plants. The unusual appearance of the monkey-puzzle tree (Araucaria araucana), native to the Andes, has made it a visitor favorite. The arboretum's redwood (Sequoia sempervirens), typically found amid the coastal forests of Northern California, is a rare sight in these parts.

​It also contains a formal rose and perennial garden, woodland, lawns, pond, stream, and a greenhouse (reconstructed in 2002) containing about 250 varieties of plants.